Making an overview of Tableau using the sketchnoting technique. 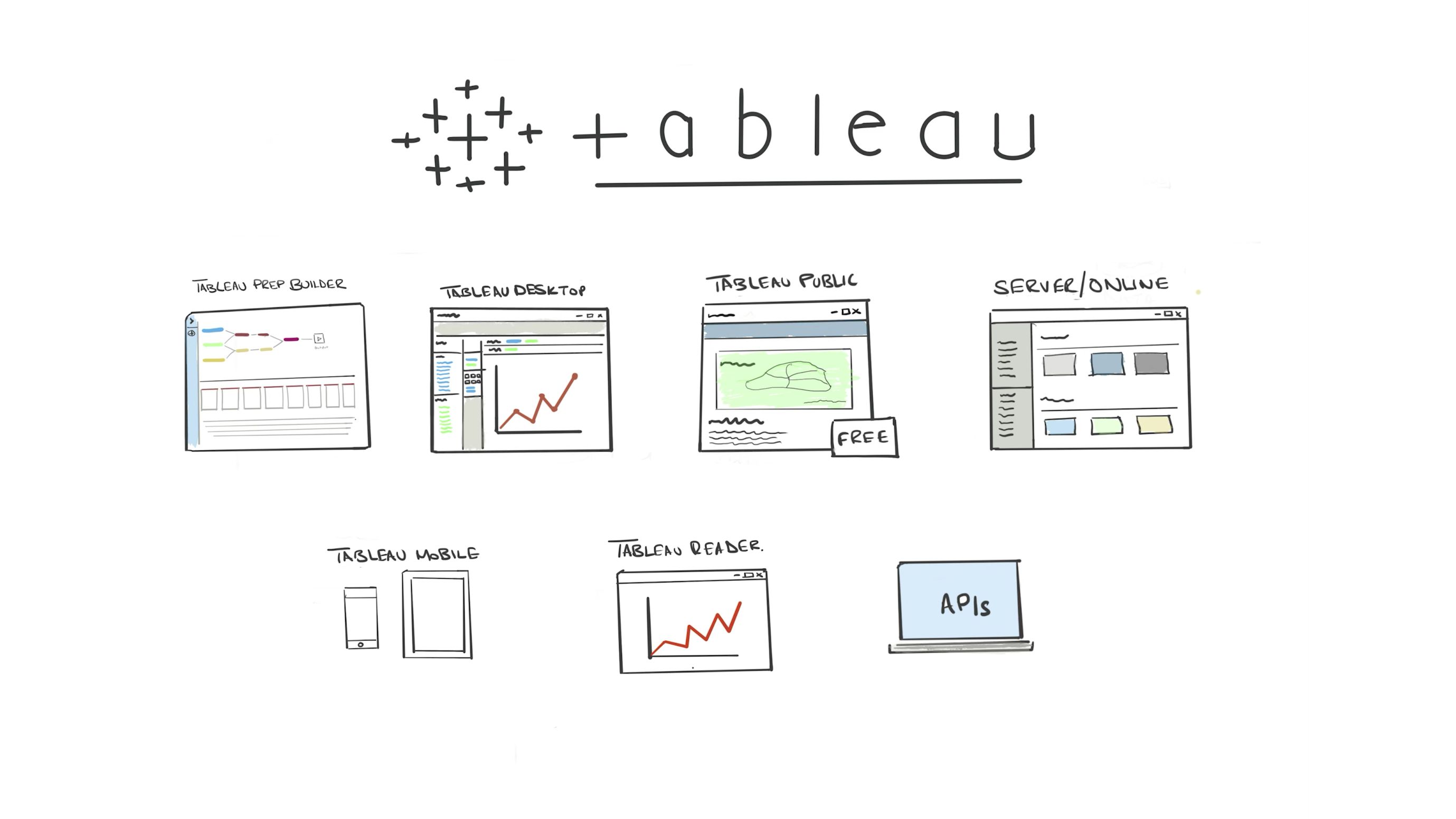 I used, Ulysses to write the script, GoodNotes to storyboard the idea, Procreate on a 12.9 iPad Pro with Apple Pencil 2 to draw the sketches then export the time-lapse of the sketches as 14 separate videos. Then used Ferrite & GarageBand with a Zoom H2n plugged in on the iPad Pro to record the narration (just wanted to try this out), Adobe Audition to clean the Audio, Adobe Premier Pro to edit it all including stitching the sketched videos into one story. More extended version? read on.

With everything going on in the world, found myself having a little more time to explore some concepts and tools that I’d honestly been just kicking further down the road for some time. I’ve been interested in the concept of Sketchnoting for a while now ever since I first saw the technique used on Ken Robinson’s talk on education. I had also used the technique in the past in a former marketing and communications role. However back then, the technique wasn’t as established, and the tools used to make a video like that had a high opportunity cost in time. However, 8 years on, quite a bit has changed and time during the Covid-19 crisis and under lockdown, it’s a little easier to find. If you haven’t already checked out the video on YouTube, here it is.

I’m not someone who comes up with new / never before seen ideas. Instead, I like to take styles from creators and authors I respect and try and apply that to what I know and understand. I also found myself falling into this trap on Youtube where I was cranking out videos, the majority of the videos catered for the very few who have to use Tableau daily and even then, those who are lucky enough to be on the latest and greatest of Tableau. So a while back in February I set out to change that and make content for new users, those who haven’t even heard about Tableau, those who wouldn’t even know they needed to know the difference between green and blue pills.

For February going to keep up the pace and start taking on a topic dear to my heart and that is, onboarding and the first 1 hour with \#Tableau Desktop.

Arriving at sketchnoting as the mechanism

As a certified trainer, one of the most important parts of the training we do is an exercise called white-boarding, essentially taking complex ideas and sketching them out on screen or on a whiteboard in simpler forms before actually opening the product and showing new users how to use it. I wanted to find a way to take this into a video but, honestly, I had always thought that my drawing skills or lack thereof would be an issue.

Small tangent, this touches on an interesting dynamic where, in the push to make what you do better, you go out to the internet and find incredible creators who have spent hundreds of hours perfecting their craft. This is great for inspiration, but it also has a massive downside. You end up unintentionally comparing yourself, the you of today with no practice or time invested into that technique versus someone who has spent the time perfecting that technique. It creates a sometimes large perceived gap in skill, yet it’s not really a fair comparison, leave alone good for your own mental health.

Sketchnoting is deliberately quite simple. I applied some techniques outlined this book by Mike Rhode and was able to make a start on some very basic concepts.

I don’t often storyboard videos, typically just hit record and make the best of it but in this instance, the room for error is just too large if you don’t plan it out. I set out to storyboard the video and then realised very quickly I was writing a script so I ended up doing that first.

I had the added limitation of keeping everything under 10 minutes, in short, attention span on YouTube is generally low so content needs to be short, ideally under 5 minutes, but that’s not enough time so by setting a limit at double that, I figured I could keep at least half the audience interested for a little longer. Nothing scientific but it seems to kinda work as a concept. Below are metrics for my video on my more recent video on layout containers released in January.

The script was written in Ulysses in Markdown. I used the estimation tools to get a realtime sense of how long the video was going to be to make sure I didn’t script something that would be impossible to narrate in under 10 minutes. 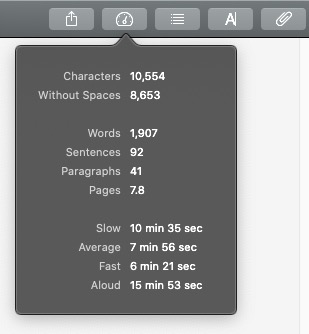 I also then went over the script and marked key phrases or words that I would try and sketchnote and narrate, making sure I was picking out the key idea from each paragraph. 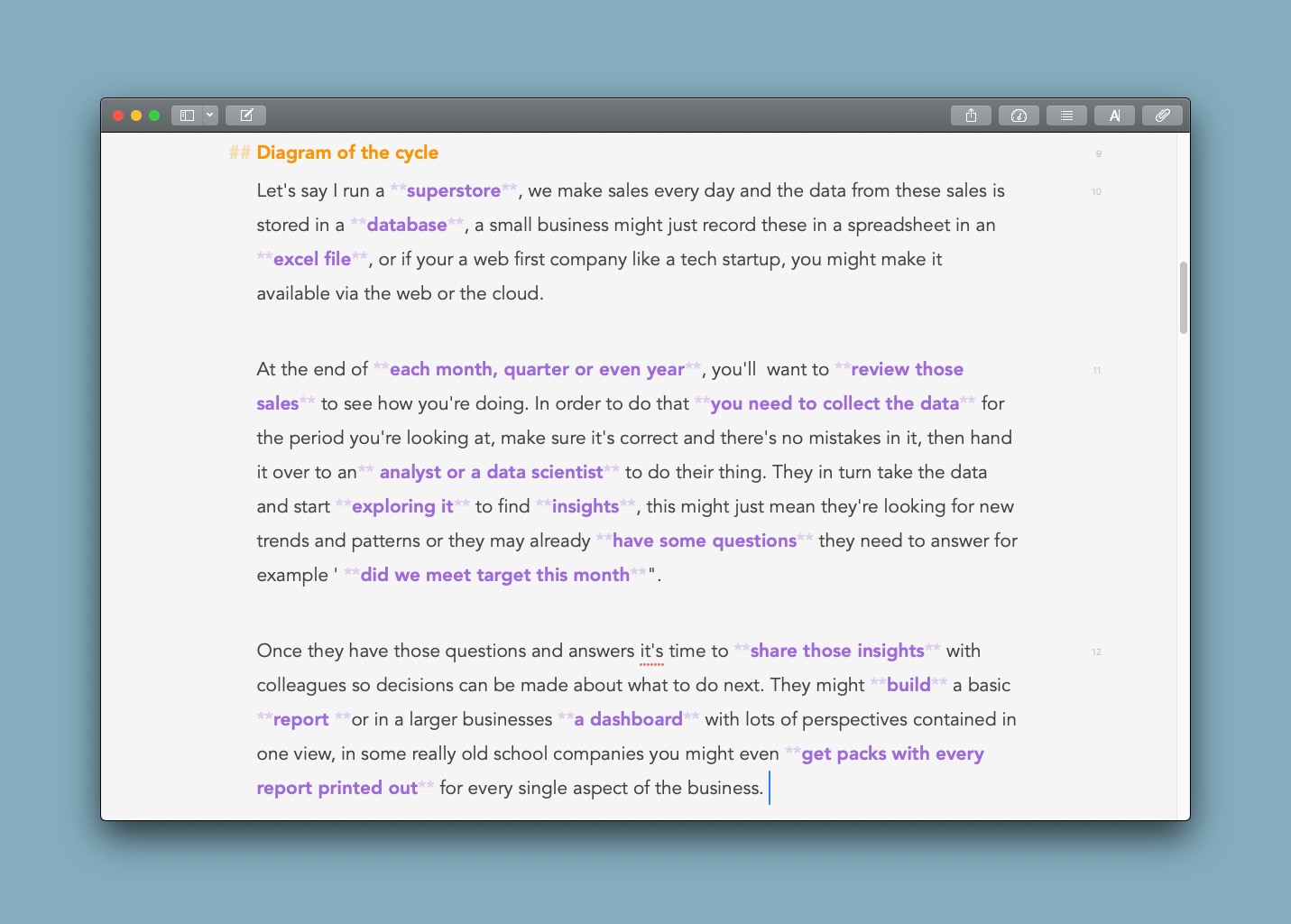 Once that was done, I was then able to storyboard the video essentially creating scenes for each sketch. 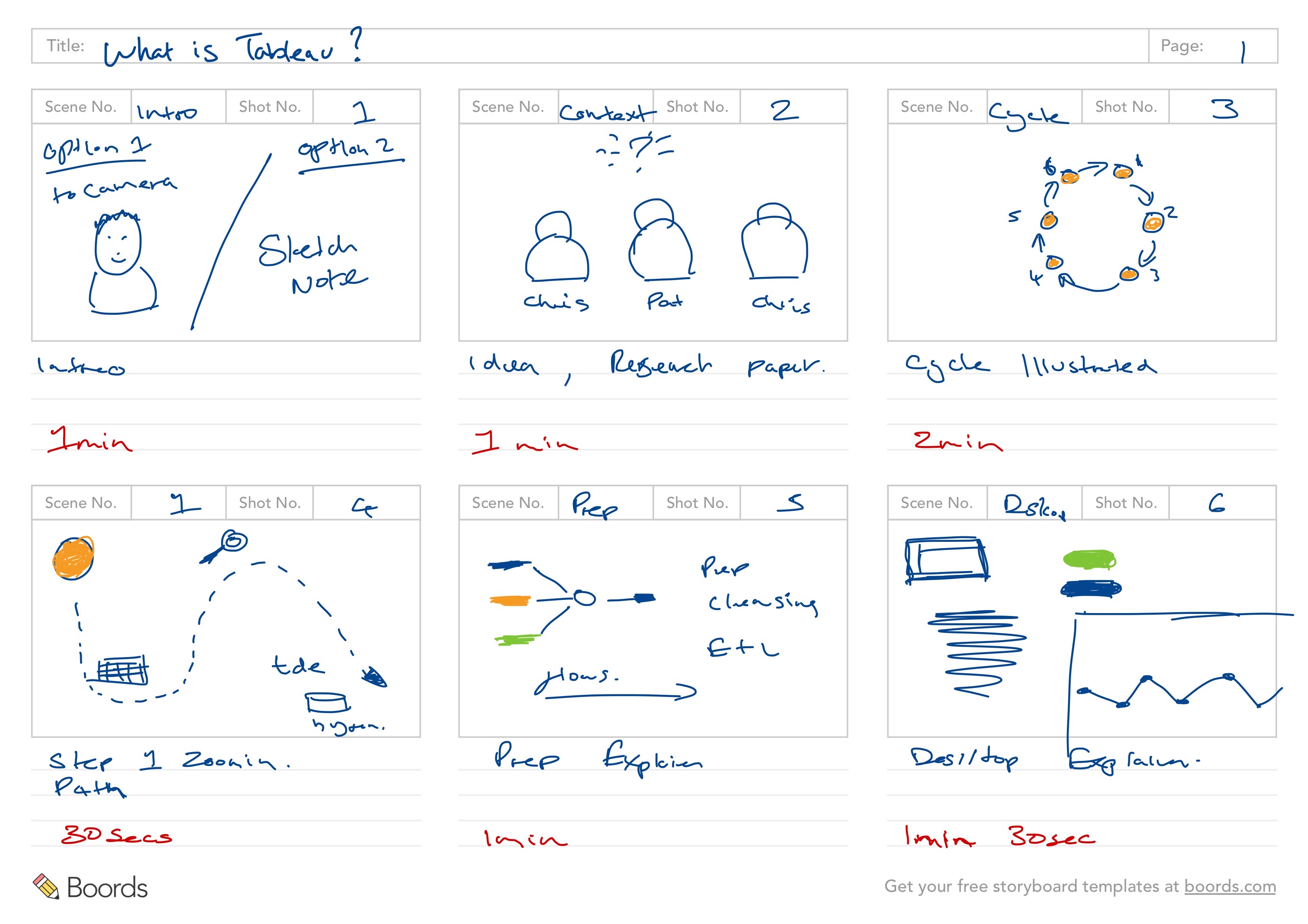 You can do this without an iPad Pro and pencil, it’s quite common to do a live sketchnote, here’s an example. I just used the best tools I had available to me and doing it digitally, made it much easier to synchronise the speech with my sketching and get that to fit in under 10 minutes. The sketches themselves took a total of about 5 hours to do. Here’s a screen recording of a small section sped up 5x. 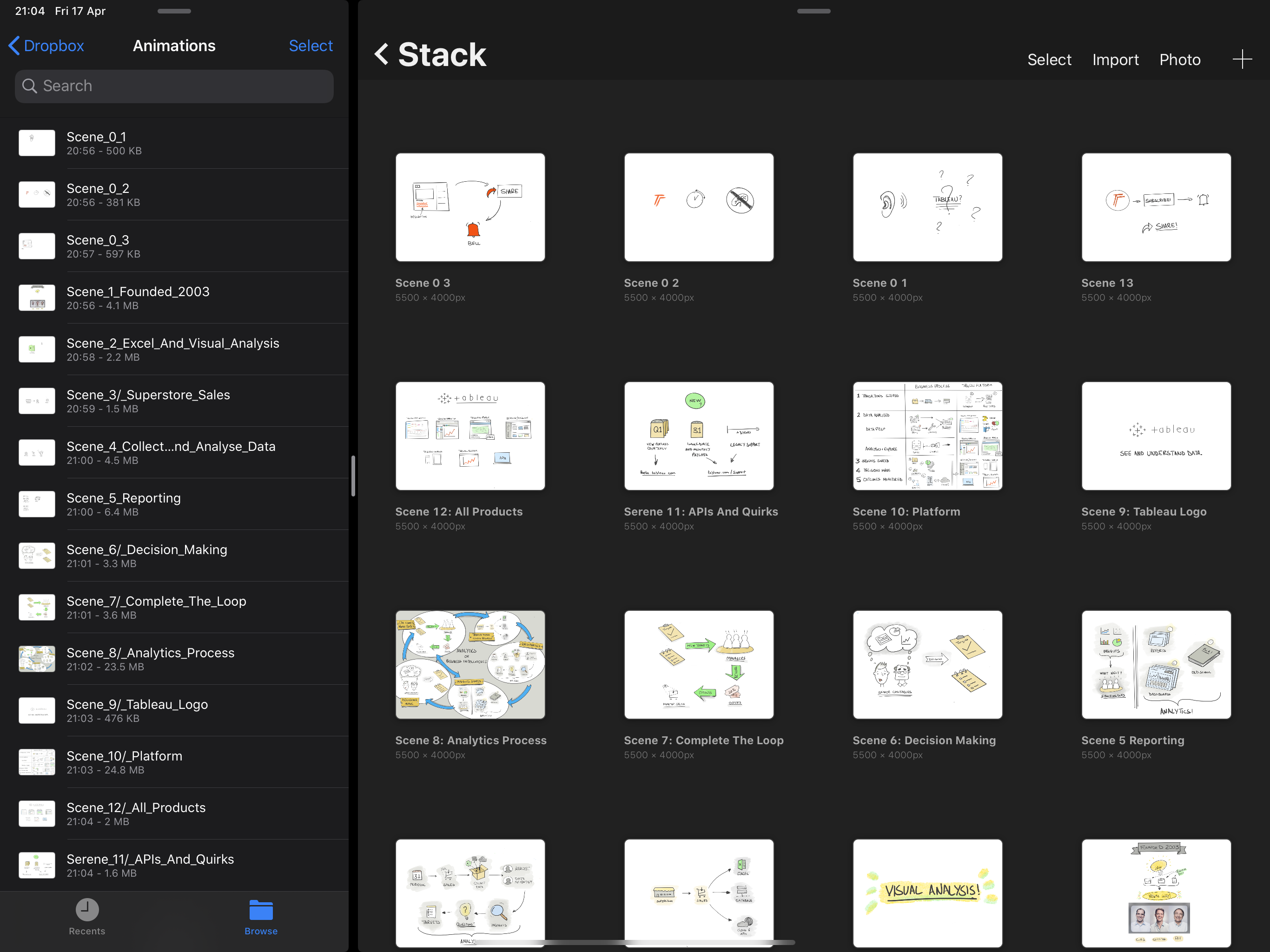 With a script already done, this was much easier to do. I had a simple setup and just spoke the content. I kept the entire session as one recording and did three to 3 takes of certain sections and corrected mistakes as I went along adjusting the script if it sounded different spoken compared to written. I tend to fix most of my of audio in post, but a good microphone makes this easy to do.

This is the toughest bit. You have a bunch of content and audio, and you need to make it all lineup into this vision which to be honest isn’t even a clear one in the first place, so most of the editing is about making the best of what you have in front of you, which seems obvious but it can really feel like you’re scraping a barrel at times. At that point re-shooting / sketching becomes a real option. To summarise, the process goes something like this.

Okay, the final bit is just the YouTube upload and we have the video. I purposefully took screenshots and recordings as I went along for my personal benefit to log the process but also as a reference if anyone asks how the process works.

Time. I had 5 clear days to do this. That played an important role in maintaining a sense of momentum and also progress. Bizarrely most of the progress involved the age old cliche of failing fast, realising your mistakes and then having another go. The digital nature of the way I did it allowed for a much higher tolerance of mistakes. That said some mistakes you just have to work with, the most obvious one when I drew the circle off the frame in the analytical workflow, then noticed too late in the edit to do anything about it, facepalm!

Tools. I used many tools, and I’m probably missing others. It can be done on a much leaner setup, for example, writing and storyboarding could have been done in a notepad, your phone can capture really great audio for narrations if you get yourself isolated from other sounds. The sketching can be done on paper and filmed using a basic phone tripod, and lastly, you could edit and clean the audio on a modern smartphone with free or really cheap apps, it just takes time, but if you plan around it the result is the same. It would be a mistake to read this blog and go out and start using the exact same tools to try this on an idea of your own unless you already knew how to use the majority of the tools.

Reach out if you have questions.